So last week, Sweden distributed copies of Chimamanda Ngozi Adichie’s Ted Speech, the same speech that Beyonce sampled a part of in her hit song FLAWLESS, now made into a little book; WE SHOULD ALL BE FEMINISTS, to all second grade high school students (16 year olds), which is not too surprising because Sweeden as we know is big on Gender Equality. Currently, 12 of its 24 ministers are female. Swedish law also mandates 480 days of parental leave to be shared equally between both parents.
This kind of equality is what I like to hear. 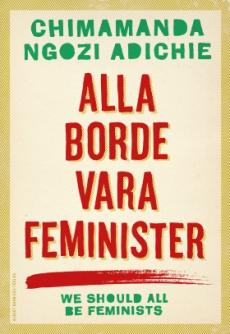 For me though, if anyone should be reading this book, it should be men, especially African men, so that these arrogant and ignorant talk of feminism being just about house chores and cooking alone can end.
No woman should have to be told that she can or cannot or didn’t or shouldn’t do anything because she’s a woman.
And to be honest soon enough, I hope that feminism doesn’t have to be a sort of group slogan, but a true essence of equality.